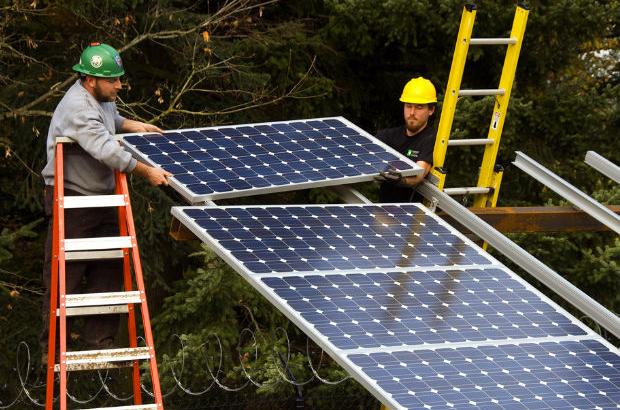 Oregon has the opportunity to take a major step in the transition from polluting energy to a clean energy future. The Clean Energy Jobs bill, currently being considered by the Oregon legislature, limits climate pollution and invests in clean energy strategies that create jobs and support clean air.

What is the Clean Energy Jobs bill?

It’s the biggest climate priority being considered in Salem this year. Senate Bill 1070 would do three things:

How does the program work?

Senate Bill 1070 requires the biggest emitters of climate pollution to hold permits (called “allowances”) for each ton of carbon emissions they emit. These companies can meet that obligation in three ways: 1) reduce their climate emissions on site below the cap; 2) purchase allowances at auction or trade for them for the balance of their emissions; or 3) meet part of their obligation through “offsets,” where a different entity reduces their emissions by an equivalent or greater amount.

Revenue from the allowance auction is invested in clean energy solutions and job creating opportunities in our local communities, Companies that reduce their emissions below the cap can sell or trade their extra allowances to other companies.

The cap covers all major sources of greenhouse gases, and will decline over time to continue to reduce climate pollution and provide a long time horizon to assist businesses in planning. The price for pollution is designed be relatively stable. Regulated industries that are particularly energy-intensive or face direct out-of-state competition (called “trade exposed”) may receive a portion or all of their allowances for free to level the playing field.

Has this been done before?

Ten U.S. states and 39 countries, including China, have a system to price carbon pollution planned or in place, covering about 50% of the world’s emissions. The U.S. solved the acid rain problem of the 1980s and ‘90s with a similar pollution pricing program.

In California and the nine Northeastern states that have adopted the Regional Greenhouse Gas Initiative (RGGI), climate pollution is falling dramatically while economic growth is ahead of the national average. California and Quebec are in a joint North American cap and trade market, with Ontario and other Canadian provinces likely joining soon. Oregon could link up with a successful system, reducing costs and giving businesses more options to reduce their emissions.

What kinds of projects would Oregon invest the proceeds in?  Who benefits?

While the primary purpose of a cap and invest program is to curb climate pollution, it also creates major reinvestment opportunities that further decarbonize the economy. Early estimates project that although the price on pollution starts relatively low, the auction of allowances under SB 1070 would raise around $700 million dollars a year.

The proceeds from the auction of allowances will be used to accelerate Oregon’s transition to clean energy, while expanding opportunities for low income and rural communities, communities of color, and impacted workers.

These funds would be invested back into the growing Oregon’s clean energy economy, creating local jobs and training, attracting matching investment and making our state’s economy more competitive and sustainable. Some types of projects include:

To support the communities disproportionately impacted by climate change, SB 1070 dedicates significant resources toward investment and economic opportunities that benefit communities of color, low income, and rural communities, such as energy bill assistance and weatherization in low-income housing, as well as just transition programs such as worker training.

How much difference would this make in the fight against climate change?

This strategy gets Oregon back on track to achieve our greenhouse gas reduction targets and drive our clean energy economy forward. The Clean Energy Jobs bill lays the foundation across the whole economy, while the state’s other policies provide more targeted strategies, including the Renewable Portfolio Standard, Clean Fuels Program, energy efficiency programs, and programs to support transitioning to electric vehicles. While those strategies drive down climate pollution in targeted ways and encourage the transition to clean energy, an emissions cap and price acts as a necessary backstop.

Nearly 200 countries agreed to the Paris Agreement on Climate Change to cut emissions in order to keep the world from dangerous warming. The actions of cities and states like Oregon, as well as countries, are needed to meet the goal set in Paris and limit global temperature increase to 1.5 degrees Celsius.

It’s time for Oregon to take a major step forward on fighting the climate crisis by passing the Clean Energy Jobs bill.